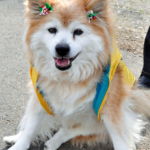 RIP: Pusuke, a 26-year-old mixed-breed male officially recognized by the Guinness Book of Records as the world’s oldest dog, passed away this afternoon at his home in Sakura, Japan.

According to his owner, Yumiko Shinohara, Pusuke had shown no signs of distress until this morning, when he abruptly began refusing food and developed a breathing problem.

He passed away shortly after Ms. Shinohara returned home from a stroll. “I think (Pusuke) waited for me to come home,” she is quoted as saying.

This site uses Akismet to reduce spam. Learn how your comment data is processed.