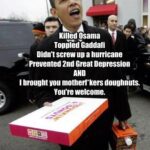 I don’t live in America, but that is the best president you will ever have. Don’t screw it up when it’s time for election again cause this man is actually fixing your country and the shit that Bush fucked up. He’s not a fucking magician, he won’t fix everything with a snap of his fingers, but he’s at least doing something.

AND ALL WHILST BEING AWESOME.

THIS, A HUNDRED TIMES THIS

This. At least he’s trying.

I couldn’t agree more with the first comment. Seriously guys.

I have to agree.  With the amount of shit wrong with this country, at least he’s doing something.

Honestly, it irks me so much when people say he hasn’t done anything for this country. Do they really expect him to fix 8 years worth of problems and debt the Bush administration racked up in under 4 AND with the most partisan government we’ve probably ever seen? Lesser men would be crushed under the stress he goes through.

I really need to register to vote now that I’m 18. Gotta vote for Obama in only a year’s time.

ya’ll have a point, but also realize that mr. prez still doesn’t have the guts to do a lot of the shit that still needs to get done. but I give my homie Obama points for the above stuff.

he still wouldn’t fuck us up as much as a conservative would, i’m sorry. weigh all the things he’s dealing with now and the things he’s already accomplished in 3 years and that’s more you can say that you’ve done in a lifetime. also, we have a republican congress who just doesn’t want to give Obama any “wins” instead of giving the American people “wins” SO